Life in a Barrel 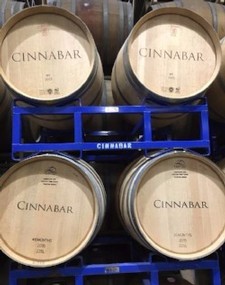 This is a special time of year when wine is developing in-barrel, where harmony is in the making. So, what goes on inside those hallowed, oak halls? As soon as the wine goes in-barrel it undergoes malolactic fermentation (ML)—the process by which the acids in the grape go from malic to lactic. But the acids aren’t the only components. The wood itself plays a critical role. Cinnabar uses American and French oak barrels.

Barrels are made by “coopers.” First, the wooden staves used to create the barrel are weathered outside for two to three years to season the wood and soften the tannins. After the barrel is formed, it is toasted over heat and the sugars in the wood caramelize, adding a level of complexity. Oak barrels differ in character: American oak is sweeter and imparts aromas and flavors of vanilla, coconut, and dill. Whereas, French oak has some vanilla but is less sweet and gives wine more spice and tannin character. Oak barrels also help wine develop by allowing a micro amount of oxygen to interact with the wine, helping the wine evolve from primary fruit (grapy) to complex aromas, flavors, richness, and texture in addition to stabilizing the color and clarifying the wine.

Commenting has been turned off.