The Cinnabar Name and Medallion

In ancient times, alchemists believed they could miraculously transform base metals into silver and gold with the help of the mineral cinnabar. Consequently, this purple-red ore of mercury was highly coveted by medieval nobility. Time has proven them wrong, but that conviction endured for Tom, who named the winery "Cinnabar" for the miraculous and timeless process of transforming rainwater into his handcrafted wines.

A true renaissance man, Tom never strayed far from his interest in astronomy, and he developed the medallion as the focal point of Cinnabar’s brand in the late 1990s. 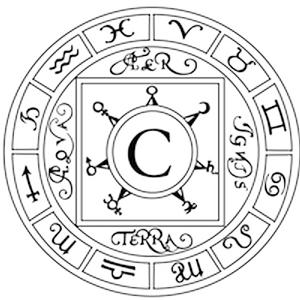 Words Outside the Square

The four “elements” from which, it was thought, all matter originated (clockwise from the top): Aier (air), Ignis (fire), Terra (earth) and Aqua (water).

Symbols that Circle the Letter “C”

Icons symbolizing the Sun, Moon and five other planets known in the 13th century (clockwise from the top): Sun, Moon, Saturn, Jupiter, Mercury, Mars and Venus.

Letter “C” in the Center

“'C' is for 'Cinnabar' and it rightfully belongs in the center of all forces in the universe," said Tom, in jest, while explaining the medallion in 1999.